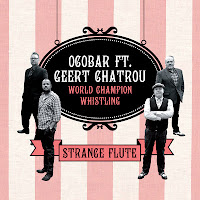 Spotify free streaming as of May 20
In 2003, Geert Chatrou of the Netherlands won the World Champion Whistling competition, held in the U.S. He won again in 2004 and 2006. It's history—you can look it up. When the Dutch label Basta learned of Chatrou's initial victory, they heard an idiosyncratic pop star in the making. After all, how many vocalists can boast that their singing can be understood in any language, and by listeners of all ages?
They phoned Chatrou to discuss signing with the label. Chatrou replied that he had just been contacted by Dutch band Ocobar—who coincidentally had signed with Basta the previous year—asking him to collaborate. Affirming a date with destiny, Basta’s original plan had been for Chatrou to record an album with Ocobar. The resulting collaborative CD, Chatroubadour, received excellent reviews, sold well, and various tracks wound up in TV ads and films around the world.

A followup was inevitable, though it took nine years. In the intervening years, Chatrou and Ocobar further honed their musical (and whistling) chops, to the extent that the 2013 sequel, Strange Flute, can't simply be called "Part Two." What Ocoboar and Chatrou first accomplished in 2003 has evolved into something more sophisticated and virtuosic, while their sense of fun has been retained. And as with their first album, the "singing" is done in a universal language. Listen. You will understand.

Here's the video for the track 'Barbers & Boobs':

and another track for you to enjoy: